In this blog, researchers and module coordinators, Dr Nicola Lindson and Jonathan Livingstone-Banks, discuss the Nuffield Intervention Ladder: a way of systematising interventions on the ‘Libertarianism’ to ‘Collectivism’ ideological spectrum that often influence approaches to public health matters.

For anyone working in healthcare policy in the UK, a change of Health Secretary brings uncertainty about where they will stand on ongoing public health issues, like tobacco control.

Previous health secretaries have shown quite changeable levels of willingness to intervene in public health. Some have been more hands-on, making policy decisions like implementing plain packaging for tobacco products, or the 2006 ban on smoking in public places, whereas others have shown reluctance to interfere in individuals’ lives, even if for the sake of improving their health. Some have even gone as far as using derogatory language to describe such measures, invoking the label ‘nanny state’.

Tobacco control policy has been tumultuous lately. Three changes in health secretary ago, Sajid Javid commissioned an independent report from Javed Kahn into the government’s ambition to make England smokefree by 2030. This resulted in a set of bold recommendations for moving forward tobacco control policy. While there was scepticism at the time as to what extent the recommendations would be implemented, commissioning the report in the first place was seen as a positive sign.

After Javid’s resignation, the role went to Steve Barclay, whose voting record favoured tobacco control measures more than Javid’s. However, after only two months in post, the change of prime minister brought another change of health secretary. Many were worried that under new health secretary, Thérèse Coffey, tobacco control might be set back because of her voting record against tobacco control measures (and her receiving gifts/hospitality from the Tobacco industry). Ultimately, we never got to see what Coffey would have done, given her even briefer tenure.

Now Steve Barclay has been re-appointed as Health Secretary. Though it’s still early days, tobacco control professionals will be eagerly waiting to see what happens next.

So why is there so much variation in the approaches to tobacco control and other public health matters?

All of this variation in approach to public health has a philosophical basis. Decisions about public health policy are influenced by where the health secretary (and their team) lies on the spectrum between Libertarianism and Collectivism.

This is important because with any healthcare decision, the empirical evidence is never enough to pick a course of action. Ideological views, or values, inevitably have to be taken into account. For example, the evidence for certain tobacco control measures is well-established. However, whether they should be implemented depends not only on whether they work, but also on whether the trade-off of individual freedoms is worth the benefit in lives saved. For those towards the collectivist end of the scale, the expected benefit won’t need to be as high as for those towards the libertarian end.

The trouble is, the picture is rarely as simple as comparing a mere weighing of pros and cons. Libertarian arguments against tobacco control often espouse that individuals have ultimate responsibility for their own health and that government intervention to reduce tobacco-related death brutally curtails their freedoms. These arguments, while appearing to simply occupy a place in this philosophical spectrum, neglect to take into account the role the tobacco industry plays in curtailing individual freedoms by targeting people with marketing for an addictive product. When it comes to behaviour and freedom, addiction always has its finger on the scale.

So, how can we use this understanding?

The Nuffield intervention ladder is a way to try to systematise the above by placing different kinds of intervention on the ‘Libertarianism’ to ‘Collectivism’ ideological spectrum. Interventions higher up the ladder are more obtrusive and thus require more justification, whereas those lower down the ladder involve less intervention and are therefore more palatable to those on the libertarian end of the spectrum.

The position on the ladder traces not only the amount individual freedoms are affected, but also how much agency is required from an individual in order for them to benefit. Typically, the less agency required, the better a policy is for addressing health inequalities, as the usual hurdles for engagement are bypassed. In this sense, smoke-free policies in public places, which restrict individual choice, can be more helpful than health warnings, which require more individual engagement to be successful. 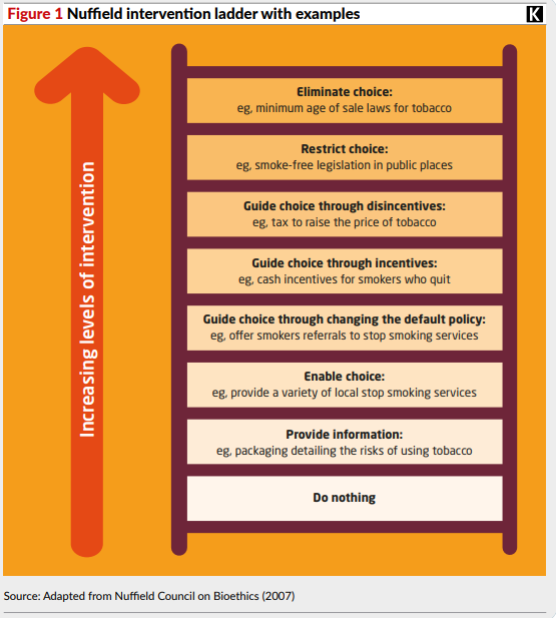 We can see here how different tobacco control polices fit on different sections of the ladder. There are already enacted policies, such as minimum age of sale and smoke-free spaces, that feature high up on the ladder. This is because they have a greater impact on individual freedoms. However, despite this, evidence suggests that the public can be more comfortable with these more intrusive measures than politicians might expect.

So what will our new health secretary do? Just recently, Chris Whitty brought attention back to the Javed Kahn report and its ‘high-ladder’ recommendations. However, Steve Barclay proceeds, it will be determined, at least in part, by his ideological position, and how far up the Nuffield ladder he’s prepared to climb.

If you want to learn more, we explore this and other fascinating topics in healthcare in our short, accredited training courses: Health Behaviour Change and The History and Philosophy of Evidence-Based Health Care.

The History and Philosophy of Evidence-Based Health Care