The LR is used to assess how good a diagnostic test is and to help in selecting an appropriate diagnostic test(s) or sequence of tests. They have advantages over sensitivity and specificity because they are less likely to change with the prevalence of the disorder, they can be calculated for several levels of the symptom/sign or test, they can be used to combine the results of multiple diagnostic test and the can be used to calculate po st-test probability for a target disorder. For example, if you thought your patient’s chance of iron deficiency anaemia prior to doing the ferritin was 50-50, this pre-test probability of 50 per cent translates as pre-test odds of 1:1, and the post test odds can be calculated as follows:

Switching back and forth between probability and odds can be done simply using a nomogram (you can click here to view a PDF of the nomogram on its own for easy printing): 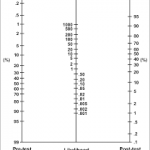 We can assume that there are four possible groups of patients:

This example is taken from the results of a systematic review of serum ferritin as a diagnostic test for iron deficiency anaemia: