The Laws of Life: Guldberg and Waages' Law of Mass Action

The Law of Mass Action describes how the velocity of a chemical reaction is related to the molecular concentrations of the reactants. It underpins several types of biochemical, physiological, and pharmacological phenomena. These phenomena are listed in the introductory article in this series, and they include descriptions of the actions of enzymes, cellular regulation of pH, and how drugs bind to receptors.

2. History of the Law of Mass Action

The concept that there is a chemical force, called “affinity”, by which dissimilar substances are held together, is thought to have originated with Herman Boerhaave (1668–1738; pictures), an influential polymathic Leiden physician, chemist, and botanist, and the author of Elementa chemiae. 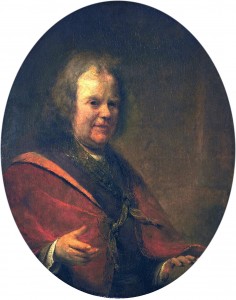 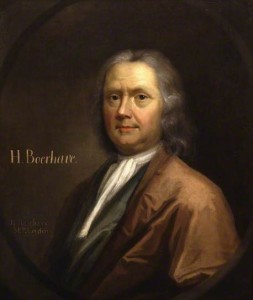 Herman Boerhaave, in portraits by Aert de Gelder in 1722 (left) and an unknown artist (right); the former is in the Royal Picture Gallery Mauritshuis in The Hague, and the latter in the Royal College of Physicians of London.

Later, the French physician and chemist Claude Louis Berthollet (1748–1822) investigated the forces that drive chemical reactions and established the relation between the mass of a substance and the rate at which it undergoes a chemical reaction. He described the idea of affinity in his 1801 treatise Recherches sur les lois de l’affinité, propounding “the laws of the affinity by which bodies tend to join together or combine”, and later developed it in his Essai de statique chimique of 1803. It was soon recognized that chemical affinity is relevant to therapeutics. For example, Jonathan Pereira in The Elements of Materia Medica (1854) wrote that “The action of a medicine on one organ rather than on another is accounted for on the chemical hypothesis, by assuming the existence of unequal affinities of the medicinal agent for different tissues”. This later became important when the idea of drug receptors and the theories linked to them emerged. 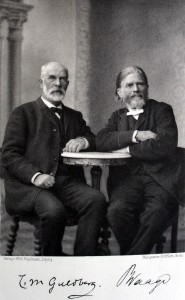 However, it took until 1867 before what we now call the Law of Mass Action was clearly stated by the Norwegian chemist Cato Guldberg and the mathematician Peter Waage (right) in Etudes sur les affinités chimiques, following their original 1864 paper in Norwegian. The idea was rediscovered in 1877 by the Dutch chemist Jacobus Henricus van’t Hoff (1852–1911), who classified chemical reactions and defined their orders. Based on this, the Swedish chemist Svante Arrhenius deduced a formula for the effect of temperature on the reaction rate constant.

As the British chemist Edward Guggenheim later pointed out, although Guldberg and Waage were the first to appreciate the qualitative nature of chemical reactions and the rates at which they occur, they did not formulate a correct quantitative expression for the equilibrium condition until 6 years after August Horstmann had done so for gases and 2 years after Jacobus Henricus van’t Hoff had done so for esterification.

3. Derivation of the Law of Mass Action

The problem that Guldberg and Waage set themselves was to derive a mathematical description of the affinities that drive chemical reactions. This involved both the rates of reactions, which they called “chemical dynamics”, and, for reversible reactions, the equilibrium between the forward reaction and the backward reaction, which they called “chemical statics”. That there are two separate parts to the problem has sometimes been forgotten.

(a) Rate of reaction

Guldberg & Waage first considered the rate of a reaction and used data from reactions in solution. They proposed that for a reversible reaction that takes place in one phase, the rate was proportional to the “active mass” of the reactants (“La force est proportionelle au produit des masses actives des deux corps A et B”), where “active mass” is the mass per unit volume—that is, the concentration.

In a reaction symbolized as follows:

…the rate is related to the number of species involved in the reaction, and so depends on the precise reaction path. Thus, if there is a series of intermediate reactions whose form is not known, it may not be possible to calculate the rate of reaction, even when the overall reaction is known. If the disappearance of a reactant A follows first-order kinetics (i.e. when the rate of the reaction is proportional to the concentration of the substance undergoing the reaction) it follows that:

… where k is the proportionality constant. [The minus sign in equation 2 simply denotes that in this case A is being consumed or disappearing from the system].

This, incidentally, is precisely the form of equation that is used to describe the first-order disappearance of a drug from a sampling compartment in pharmacokinetics.

Theoretical treatments of reaction kinetics subsequently took into account the energy required for a species to react, the time for a suitably energized species to react, and the spatial arrangement of the reactant.

In equation 3, kass represents the rate at which A and B associate, forming AB, and kdiss represents the rate at which AB dissociates, forming A + B. The velocity of the forward reaction (a second-order reaction, since it involves the association of two species) is proportional to the product of the concentrations of A and B, with kass as the proportionality constant:

…and the velocity of the backward reaction (a first-order reaction, since it involves the dissociation of a single species) is proportional to the concentration of AB, with kdiss as the proportionality constant:

At equilibrium these two velocities are equal:

Since kass and kdiss are both constants, the ratio kass/kdiss can be replaced by a new constant, Keq, known as the equilibrium constant, which is technically easier to measure than either kass or kdiss.

Guldberg and Waage’s Law of Mass Action is one of the basic laws of life. It can generally be taken to describe principles that apply universally to all reactions. However, a small caveat is necessary.

Another good example comes from a dispute between Berthollet, mentioned above, and another French chemist, Joseph Proust (1754–1826) (pictures). The latter hypothesized the law of definite or constant [chemical] proportions, namely that chemical compounds are composed of a fixed ratio of their constituent elements, no matter how they are produced. Berthollet thought otherwise, that the ratio can vary depending on the initial ratio of the reactants that produce the compound. Proust’s theory was subsequently substantiated. For example, water, H2O, is composed of two atoms of hydrogen and one of oxygen; there are no other proportions of the two elements that together produce water. 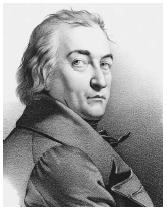 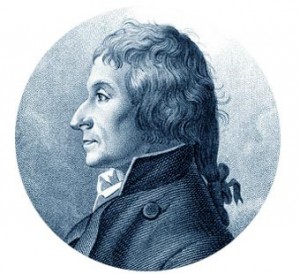 However, Proust’s law is not generally true: there are a few compounds, also called berthollides, that are non-stoichiometric and don’t obey the law of definite proportions. They are typically metal oxides that can exist in lower and higher oxidative states. For example, iron(II) oxide can exist in the form of FeO, but it is more commonly found as Fe0.95O; other forms, generally designated as Fe1-xO, are possible.

It is with this stricture in mind that I have here described the Law of Mass Action. When applied to a range of biological systems the law yields relationships that predict outcomes in controlled cases, i.e. “if nothing gets in the way or goes wrong”. It may also generally be used to predict outcomes even when the circumstances are not so well controlled, and in most cases the predictions that result are adequate to the circumstances. However, there are cases in which it may not apply so well, cases that are beyond the scope of this discussion.

In subsequent articles in this series, we shall see how various laws of life can be derived from the Law of Mass Action, with practical examples that will demonstrate its biological importance.

This article is based on a paper in the British Journal of Clinical Pharmacology, in which later developments in the history of the Law of Mass Action are also discussed.