Coming together in person to discuss and experience cultural/creative focused social prescribing: A knowledge exchange event

Social prescribing is one means of supporting people with social, economic or environmental difficulties that can have a negative impact on how they feel physically, mentally and/or emotionally. It involves connecting individuals to ‘community assets’ (groups/charities/organisations) to help with their non-medical needs; this could include connecting them to 'cultural offers' (e.g. becoming a museum volunteer, joining a singing group, or taking part in a book club), if relevant to an individual’s needs and preferences. Link workers (also known by other terms such as social prescribers, wellbeing workers or community navigators) are key in making these connections. They are often employed to work in GP practices to deliver social prescribing. They meet with people who are referred to them (usually by a medical professional) or, in some cases, have self-referred.

Benefits of cultural and creativity for social prescribing

Engaging in cultural and creative activities (‘cultural offers’) can bring a range of potential benefits; our UKRI/AHRC-funded research* has shown that these include being absorbed and taken away from life concerns for a time, feeling part of a space that is welcoming and supportive, making connections with others, and learning skills and unearthing abilities that increase confidence and allow for self-growth. For this reason, cultural and creative activities can form part of a social prescription.

For cultural providers to play a role in social prescribing, link workers must be aware of what they can offer. Likewise, these providers need a good understanding of what social prescribing entails and how they, as members of the cultural sector, can get involved. A questionnaire we carried out highlighted that these two groups (link workers and cultural providers) do not necessarily communicate or interact. Therefore, we ran a knowledge exchange event, supported by the Knowledge Exchange Seed Fund (University of Oxford). It brought together link workers, cultural providers and others with an interest in this topic (e.g. policy makers and researchers). The day was planned to facilitate the sharing of ideas, networking, and enabled those present to experience creative/cultural activities first hand. 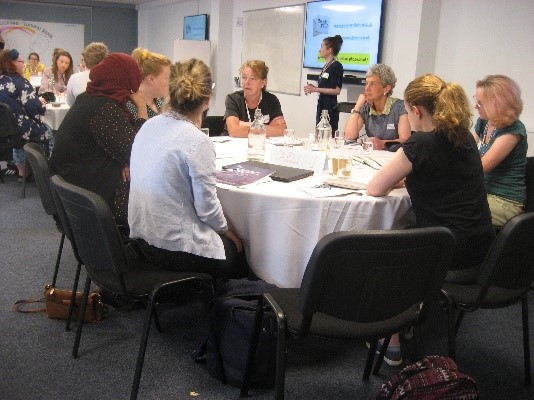 The event took place in Oxford on 23 June 2022 and was attended by 48 people. The first part of the day was discursive, covering barriers and enablers to a) link workers using the cultural sector as part of social prescribing and b) the cultural sector taking part in this type of community support. We also had some time for considering, as a group, solutions to the problems identified. We are writing a report from the event, which will document this information. The afternoon gave those present the opportunity to try out a range of cultural/creative activities because our research suggested that link workers were more likely to refer people to cultural activities that they had experienced themselves. This may also shape how they ‘message’ the idea of a cultural activity to someone as part of a social prescription; link workers may be more convincing and enthusiastic if they have tried it themselves. The activities that took place in the afternoon were: Feedback (in the form of a questionnaire that those attending completed) was very positive. It suggested that the event had met its aim of enabling link workers and cultural providers to network. Most people said that they would be following up on connections they had made and wanted more of this type of event. This is highlighted in comments people made on feedback questionnaires, which included the following:

"Vital connections made between link workers and cultural organisations. To be continued! Good timing and facilitation."

"It was the first time I have met any social prescribers. As a small grassroots charity it has been so difficult to find the contacts, so it was really incredibly useful to be able to show what we do".

"Exciting to be around people who have the same passions. Positive to see all the potential there is in the community".

"It was useful to get a sense of what's on offer and be able to describe in more detail, but also the activities were just really fun!"

"It was great to get an insight into what people can expect from the events so that I can tell them about the groups with confidence".

The views expressed above are those of the authors and not necessarily those of their host institutions, organisations mentioned or funding bodies. For further details, please contact Stephanie Tierney (stephanie.tierney@phc.ox.ac.uk).