Since the 1990s, the prescribing of strong pain medicines called opioids has increased in England and most high-income countries. Oxford researchers review the global and national use of opioids and have developed tools to improve patient safety. The core areas of research and their outputs are highlighted below.

Global use of opioids

Previous studies of global opioid use have concentrated on morphine alone or a subset of opioids, with a focus on cancer pain and palliative care. We conducted a cross-sectional study using data from the International Narcotics Control Board (INCB) for 2015–2017 to determine the global, regional, and national consumption of all controlled opioids, including anaesthetics, analgesics, antidiarrheals, opioid substitution therapies, and cough suppressants, in 214 countries and non-metropolitan territories. 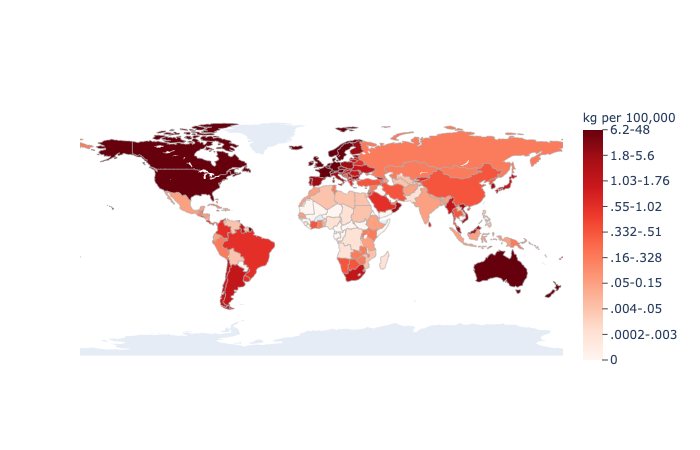 Figure 1: Annual mean consumption of controlled opioids for 2015–2017 grouped by deciles for all countries and non-metropolitan territories (n = 214). Consumption refers to the total amount of controlled opioids distributed for medical purposes and excludes recreational use; it was calculated by determining the 3-year mean for 2015–2017 and dividing this by the 2016 population for each country obtained from the World Bank. Image published in the British Journal of Pain.

Disparities in accessing essential opioid medicines persist in most of the world. Consumption patterns should be monitored, and collaborative strategies should be developed to promote access and the appropriate prescribing of opioids in all countries and non-metropolitan territories.

This study was published in the British Journal of Pain. Retweet the summary of our findings here!

National use of prescribed opioids

There was a range of prescribing behaviours across clinical commissioning groups in England over the latest 6-month in 2018 (March to August), with total OME differing almost eight-fold (Figure 2). If every practice in England prescribed high-dose opioids at the same rate as the lowest decile (0.17 items or £6.56 per 1000 patients per month) from March to August of 2018, we estimated that the NHS could have achieved a saving of £24.8 million. 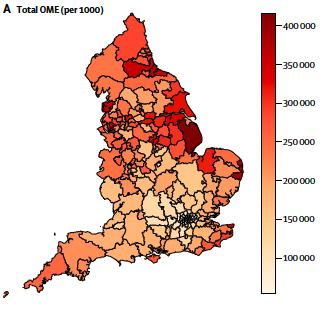 Failing to account for opioid strength would substantially underestimate the true increase in opioid prescribing. Our findings support calls for greater action to promote best practice in chronic pain prescribing and reduce geographical variation. This study provides a model for monitoring opioid prescribing in primary and tools for practice and further research, which might help highlight areas where the action is most required and aid the targeting of interventions to reduce high-dose prescribing. Future work with patient-level data could reveal more detailed high-dose opioid prescribing patterns.

This study was published in The Lancet Psychiatry.

We searched three databases and included studies that used patient-level primary care data and explored any factor(s) in people for whom opioids were prescribed, stratified by oral morphine equivalents (OME).

Six studies were included in our review, with a total of 4,248,119 participants taking opioids, of whom 3.6% were taking high doses (Richards et al. 2020). There were five factors associated with prescribing high-dose opioids in primary care, including the co-prescription of benzodiazepines, depression, visits to the emergency department, unemployment, and being male.

High doses of opioids are associated with greater risks of harm. Associated factors identify priority areas that should be considered when selecting, identifying, and managing people taking high-dose opioids in primary care. Coordinated strategies and services that promote the safe prescribing of opioids are needed.

This research was published in BMC Medicine and written about in The Conversation.

In many parts of the world, substantial numbers of people may purchase and consume codeine from OTC products. Clinicians should ask patients about their use of OTC products, and public health measures are required to improve the collection of sales data and safety of such products, including the identification and prevention of codeine misuse and abuse and raising the awareness and education of the harms of codeine.

The findings are published in the journal Drug Safety.

We collaborated with Dr Tara Gomes and colleagues at the University of Toronto on a time series analysis of regulatory changes and rescheduling of low-dose codeine in Canada, published in CMAJ Open.

Opioids are deemed essential medicines by the World Health Organization (WHO). However, many countries have inadequate access to them. Whether including opioids in national essential medicines lists (EMLs) influences national opioid consumption has not been evaluated. We conducted a cross-sectional study using the Global Essential Medicines Database to determine the numbers and types of opioids in 137 national Essential Medicines Lists (EMLs) and explore the relation of listing opioids in EMLs and opioids consumption.

The 20th edition of the WHO’s Model List of Essential Medicines included five opioids: codeine, fentanyl, loperamide, methadone, and morphine (Richards et al. 2020). Countries’ had a median of six opioids (IQR: 5–9 opioids) on their lists and the types (n=33) of opioids varied (Figure 3). Morphine (95%), fentanyl (83%), and codeine (69%) were the most commonly included opioids. After adjusting for country characteristics, there was no relation between mean opioid consumption and the number of opioids in EMLs. 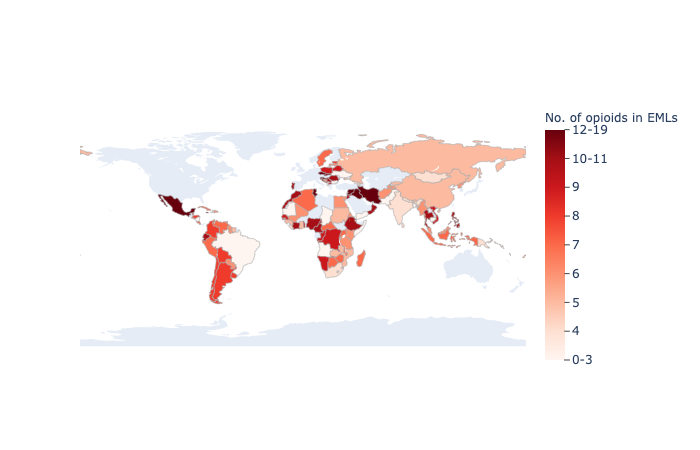 Figure 3: Number of opioids in national essential medicines lists (EMLs) grouped by nine quantiles. There were 137 countries with EMLs; countries in light grey did not have an EML. Image published in BMJ Global Health.

Simply putting an opioid in an EML may not increase supply or change prescribing habits. National EMLs should be regularly updated to reflect the availability of opioids and the populations’ needs for managing pain, palliative care, anaesthesia, and opioid dependence.

Tools and resources have been developed to improve the sharing of information regarding EMLs.

This study was published in BMJ Global Health and presented by Dr Richards at the inaugural Global Essential Medicines Meeting in Toronto, Canada. Retweet our Twitter post here!

The Oxford Catalogue of Opioids

The growing demand for analgesia, coupled with an increasing need to treat opioid dependence and overdose, has escalated the development of novel opioids. We searched seven databases systematically to quantify the number of opioid drugs developed and to catalogue them based on their pharmacology.

There were 233 opioid drugs identified, and ten unique drug stems with “fentanil” accounting for one-fifth of all opioids (Richards et al., 2021). Most (57%) drugs targeted mu-opioid receptors, and the majority (82%) were agonists at one or more receptors. Synthetic opioids were the most common (82%), followed by semisynthetic opioids (16%) and alkaloids (3%).

We created an online resource that detailing variations in opioid nomenclature, receptor targets, and actions. The Catalogue improves access to information for prescribers, regulators, researchers, and the public and promotes the safe use of opioids.

This work is published in the British Journal of Clinical Pharmacology. Retweet the summary of our findings here!

Disparities and variations in the use of and access to prescribed and non-prescribed opioids persist globally and nationally. While opioids can be overused or underused and can cause fatal and non-fatal harm, they still have a place in modern medicine in the right patient, at the right dosage regimen, and for the right reasons.

We developed several tools and resources, including measures on OpenPrescribing.net, improved access to data on essential medicines, and the Oxford Catalogue of Opioids. This research has also led to further research on deaths from opioids, the development of the Preventable Deaths Tracker, and a programme of research on preventable deaths; read more here: Preventable Deaths.

This research was examined for a Doctor of Philosophy at the University of Oxford, available for download. It has also been widely published in journals, including Lancet Psychiatry, BMC Medicine, BMJ Global Health, the British Journal of Clinical Pharmacology, and the British Journal of Pain. The research has been presented at national and international conferences, and public engagement and scientific events. Blogs, news articles, podcasts, and social media have also been used to expand our reach. Patient and Public Involvement and Engagement

In December 2019, we held a discussion group with three patients to receive input on the above studies, which helped shape what findings we emphasised, how we presented and displayed the results, implications discussed, and methods for dissemination. Photograph of the patient contributors providing input to this research on opioids, including Sean Jennings who had been taking opioids for 24 years and is now four years opioid-free.

Lead, Dr Georgia Richards, was supported by the National Institute for Health Research (NIHR) School of Primary Care Research (SPCR), the Rotary Foundation, and the Naji Foundation to conduct this research. A grant was obtained from the Primary Care Research Trust of Birmingham and Midlands Research Practices Consortium to purchase sales data on codeine from IQVIA. Article processing charges for open access publications were supported by the NIHR SPCR, the University of Oxford, the University of Toronto and the Li Ka Shing Knowledge Institute at St Michael’s Hospital. Travel to conferences was supported by grants from Kellogg College, Oxford, the NIHR SPCR, the Centre for Evidence-Based Medicine, Oxford’s Nuffield Department of Primary Care Health Sciences and the Canadian Institutes of Health Research, Ontario SPOR Support Unit, and St Michael's Hospital Foundation. The views expressed are those of the authors and not necessarily those of the NHS, the NIHR or the Department of Health and Social Care.